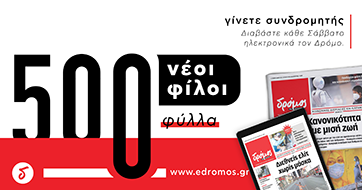 This year’s Resistance Festival emerges as an important event with significant international guests, and takes place in a crucial moment for our country. It will last three days (from 19 to 21 June) at the Agricultural University in Athens (Iera Odos). Resistance Festival is organized for the 8th consecutive year by the weekly Dromos tis Aristeras (Path of the Left).

Among the guests who will participate in the public meetings and debates are:

Below you can see three of the most important political events which will take place in the framework of the festival.

Opening Ways to the 21st century
Is a post-neoliberal world possible?

The aged Europe in a world of ataxia and crisis

Assembly-Consultation: Greece CAN in another way!

Four years ago, thanks to the squares’ movement, a great hope was born: to get rid of the Memoranda regime imposed by the Troika, and to achieve real Democracy. Today, despite the electoral victory of SYRIZA and the formation of a new government, it seems that the domination of the Memoranda regime and the cynical blackmailing by the Troika continues, and the popular hope is put in doubt. The community of Resistance Festival organizes this public assembly in order to re-initiate the debate about the necessary steps leading to a liberating perspective and a way out of the present situation. So, the floor is given to the active and concerned people, to us!

Within the next hours the final program of all the political events of Resistance Festival will be announced. You can visit Resistance Festival’s official page (Web and Facebook) to be informed also about all the concerts, cultural events and other information.

See the article in the greek language