Αρχική international Carlos Latuff: “If we stop resisting we are already dead” 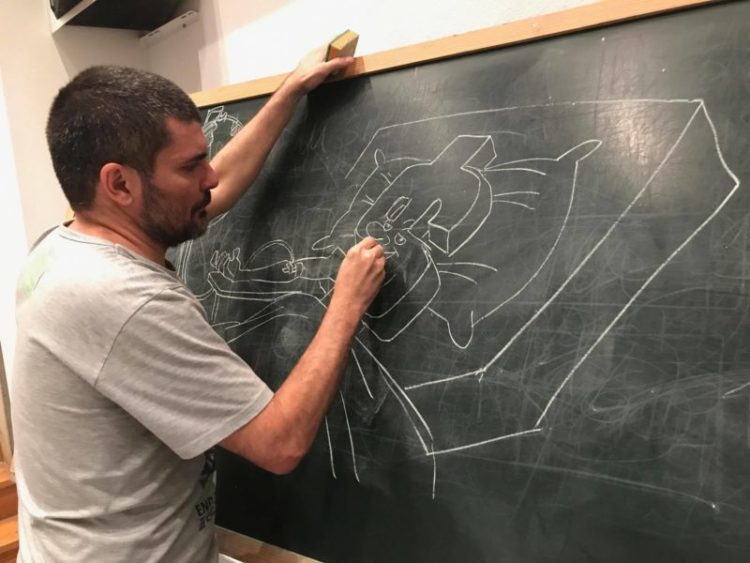 In the past few days we had the chance to meet  the international fame cartoonist, Carlos Latuff who was in our country as a guest of the 10th Resistance Festival. Carlos Latuff is present with his sketches, in all the fronts and battles that resisting people are giving all over the world. Of course not only does he not  feel like a star but he is also taken by surprise when people recognize him and talk to him with admiration about both him and his work ,stating “What am I? Just a simple cartoonist!”. From our contact with him we were impressed by his simplicity, his modesty, his special and advanced sense of humor, his knowledge about the political situation in Greece but also about our culture, his availability to discuss and answer the questions of anyone who expressed interest in him and his work. He walked a lot downtown as he wanted to feel the rhythms of Athens today. He wanted to be where things are taking place nowadays and to record them. So he has been in the court where the trial of Golden Dawn is carried out, he visited  Skaramagas refugee camp, he discussed with Irianna’s  close friends who support her from the first moment and he took part in a protest outside the Spanish embassy, in connection to the recent developments in Catalonia.

This is the second time you participate in Resistance Festival. How do you find it? What do you think of newspaper Dromos that organises the festival?

I remember the moto of the great strike of the autonomous university of  Mexico in the year 2000 “Resistance is life, submission is death”. I think this Resistance Festival always reminds us the need for resistance because without resistance we are already dead and that’s why I applaud this initiative from Dromos newspaper. I am so glad to be invited for the second time in order to participate in this great event. In the festival you attended the event- discussion which was about the greek problem and the greek reality after 2015. In this event Manolis Glezos participated. What did you find moving or  interesting in that event?

It was very touching to meet Manolis Glezos because as I said in the previous answer we need to be reminded about the need for resistance and Manolis is the living proof of this. He is also a living reminder of  how resistance is necessary so he is an example for all of us. Of course at the time of Nazi occupation, our enemy was more clear, but even now that the enemy is not so clear, for example they don’t use swastika, the need to resist, to fight back continues to be necessary. And when you bring in Greece people from different intellectual arenas, different kind of activists not only from Greece, is a way to share knowledge and also to realize that our struggle must be unified. Athough we live in different countries, we have different languages, different cultures, we have common enemies. That’s why it’s important to have a unified struggle. We must have solidarity in common too.

How did the idea of sketching begin? When did you start? When you were a teenager could you imagine yourself as a cartoonist? Have you been affected by a great artist or another cartoonist?

I use to make drawings since I was a little child. Of course I never thought I could be a political cartoonist because in fact, I only heard about political cartooning  around 1989. My first political cartoon was made in 1989 for a bulletin of an organization created by relatives of people disappeared by military dictatorship. My main artistic influence during my childhood and the time I was a teenager wasn’t any political cartoonist but the Hanna Barbera’s cartoons, the TV cartoons. It was only after 1990, working for leftist bulletins of Bazilian trade unions, that I started to get in touch with political issues and  at that time we could say the political cartoonist was born.

Sometimes cartoonists analyze the situation better than the intellectuals. In Greece we have many cartoonists who during the last years, have been much closer to what the people was saying than the politicians. What is your opinion on that?

I am not really sure if I could say the cartoonists are better analysts than the academic intellectuals. Sometimes we say the same thing but with less words or no words at all. I think the political cartoonists have the ability of summing up things. That’s why we make complicated political statements easier to understand  because we sum up things in a single cartoon, in a single image. So the capability of a political cartoonist is to make things easy to understand. Sometimes we have the same point as an intellectual, but we need less elements to explain a situation via cartoons. Resistance and the struggle of people seems to be the basic topic in your cartoons. Also you have travelled in many countries ,and at the same time, you are in contact with different people all over the world. How do you experience all this?

Maybe because of  the globalised world, we have similar problems in different places. For example the phenomenon of gentrification and the way the state is interested in getting more and more spaces mainly in the urban environment, does not happen only here in Greece but also in London. So I think we have a common enemy.That’s why we cannot think of resistance strategies in a separated, isolated way.We need to integrate the struggles. For example the natives in Chile, in Argentina, in Brazil, in different parts of south America are always in danger  by neoliberal policies.They are always threatened by governments, by companies, so despite having different tribes in Brazil or in Argentina, in Chile, I believe the struggle must be unified because the enemy of the natives is the same.We could say the same about the immigrants. They must organize themselves in Greece, in France, in Germany and everywhere.Especially now in Europe that you have far rights politicians and movements attacking the rights of  the immigrants, it’s important for them to be organised in order to face this.

Capitalism readjusts, incorporates, it looks invincible and TINA (There Is No Alternative) dominates without a serious alternative to emerge. We live a postmodern revolution. What is the meaning of resistance?

In the past, even in the recent past I used to think about resistance as a way to achieve a better society, a different society, a new human being and these kind of things. I thought it would be possible to have a different kind of society. Unfortunately now I do not think the same way. I think we have already reached a point of no return because the capitalistic system is very destructive. It’s like cancer so the world now is suffering from a cancer called capitalism. This cancer is going to destroy the whole world, it will make the world unbearable to all of us. It’s very simple for you to realize that, because this system of production and consumption is exhausting all our natural resources. It is destroying the air, the ground so it’s a matter of time until it will be impossible for us to live on planet earth. That’s why Professor Stephen Hawking the theoretical  physicist said we need to start  looking for new planets to colonize because the human kind will not last another century. So why to resist? Because now our struggle is for survival. We need to survive in this savage system. Maybe you can call me pessimistic or even realistic but now if we want to give the human kind  a breath of life, we need at least to fight back  in order to make the self -destruction   slower. We need to slow the process because the neoliberalism is accelerating the process of self destruction. We need to resist in order to have more time on Earth. So resistance in the past was necessary and now it’s necessary too maybe for other reasons but it’s still necessary because if we stop resisting we are going to die soon. Unfortunately I think capitalism managed to destroy our possibility for a better life, for a different society. Pope Francis also said something about that. If the human kind insists in this economic and political model we will be ruined.  My opinion is more realistic than optimistic but yet my own philosophy is “Ok, I know I’m going to fall but I will fall shooting back”.

There are moments that people go beyond themselves. Greece showed that in the recent past, Catalonia shows that today, Palestine shows it constantly. These moments are rare in the history of societies but there is a deeper need for freedom and liberation. What would you say about it? Can it take place without the power and the methexis of the people?

I believe as long as we are alive we must fight back. Places like Northern Ireland or Catalonia or the Basque country or Palestine are struggling for sovereignty. It’s a matter of survival. That’s why I have mentioned about fighting for survival. Of course in the case of Catalonia it is a matter of sovereignty but the case of Palestine is the case of survival. Maybe because in Europe it’s not so common to see wars of liberation in the recent past. The last big war in Europe was in Bosnia. I believe Europe is always trying to avoid wars in its own territory, they raise wars in other territories but not in their own.But I think it is a matter of time to see more aggressive wars for liberation in Europe because the process is the same. Everything is like in Northern Ireland or in  Calatonia and it is a matter of colonization. This is the direct result of colonization.So I believe resistance is the basics of life. Resistance can take many shapes and forms but if we are alive we resist.

In the past there was a slogan “Be realistic always wish what is impossible” Does it touch you?

In the past this motto would make some sense to me but now I am not sure. The Greek progressive people love you. What would you like to tell them and how close do you feel to Greece?

I feel myself extremely honored, to have this opportunity to participate in the political life of Greece through cartoons. It’s very strange because I am the only cartoonist in the whole Brazil that participates that much in the politics in Greece. Maybe I am the only cartoonist in the whole Brazil who knows more about the greek politics and I think  Greeks have more to do with Brazilians or latin Americans than Europeans. Especially your sense of  humor. My message to all of you is thank you very much for your love, for your kindness, I hope to be remembered as a friend of the Greeks. It’s my third time here. I hope to be back more often. But there is something I would like to tell you. We are talking about resistance  and irony is also a way to resist. It has to do with resistance. So as a political cartoonist I would like to tell you something. Don’t let the economic and political crisis steal your sense of humor. The sense of humor makes life less unbearable. It makes  life possible.